Shopping Cart
Your Cart is Empty
Quantity:
Subtotal
Taxes
Shipping
Total
There was an error with PayPalClick here to try again

Thank you for your business!You should be receiving an order confirmation from Paypal shortly.Exit Shopping Cart

Lieutenant Colonel Graham Jones started his military career as a musician in the Royal Artillery Band where he studied the harp under the world-renowned harpist Maria Kachinska.

In 1981 Graham was selected to become a Bandmaster and he attended the Bandmaster’s Course in 1981 at the Royal Military School of Music, Kneller Hall for three years. The culmination of his efforts produced prizes for composition and orchestration and resulted in his first appointment as Bandmaster of 16/5 The Queens Royal Lancers, during which time he was made a Member of the British Empire for his outstanding service to the Regiment. 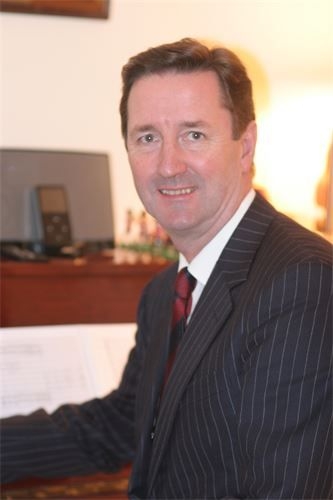 In 1994 he was commissioned in the rank of Captain and was appointed as Director of Music, The Lowland Band of the Scottish Division. In 1997 he moved to the Band of the Light Division based in Winchester, Hampshire. Three years later he was promoted to Major and posted to Headquarters Army Music, Kneller Hall as Officer Commanding the Training Development Team. Whilst there he was instrumental in pioneering the Army accreditation programme, linked to Trinity College of Music, London.

In August 2001 Major Jones achieved his life-long ambition by being appointed Director of Music, Coldstream Guards – a position unequalled in Army music. Having received his Master of Music degree from the University of Reading, Major Jones went on to gain his Doctorate of Music Arts (DMA) with the University of Salford graduating in the summer of 2006. Lt Col Jones is the first army director music to gain a DMA. He is much in demand as a lecturer, adjudicator and conductor both in Europe and the United States. Lt Col Jones has, in 2011, overseen the band’s recording of the largest collection of recorded military music covering the period 1785 to the present day – this epic endeavour, the Royal Heritage Collection, has taken over seven years to record and release.

In December 2007 Lt Col Jones was appointed Senior Director of Music and in May 2008 he was promoted to Lieutenant Colonel becoming Senior Director of Music, Household Division. Lt Col Jones retired from Army Music in November 2011 after a glittering career spanning almost 40 years of service. Now, having started his second career, Graham is as busy as ever conducting, adjudicating and organising music events around the world. He is also much in demand as a band trainer, lecturer and clinician.